Captain Al Dillon and several officers who served with him held a mini reunion in Portland, Oregon, which included a visit aboard Washtenaw. Al Hamilton sent the following summary:

A small reunion was held in Portland, Oregon on September 23-25 that brought 12 former LST 1166 officers together. These men had served in Washtenaw roughly between 1966 and 1968. It included a commanding officer from that period, Al Dillon, and his executive officer for most of that time, Pete Crews.

The three people most critical to arranging and then hosting the gathering were Al Dillon, Mike Gregovich and Mike Harman. Harman, a Lake Oswego resident (suburb of Portland) and his wife essentially hosted the two major social events of the weekend.

On Friday, we gathered for the first time in 36-40 years (depending on service) at the Lake Oswego Country Club for an evening gathering. On Saturday night, we all convened at the Harmans' beautiful home where Mike and Sandy Harman whipped up a huge Great Northwest feast of local seafood.

On Saturday, we made an emotional and very meaningful trip to visit the ship, or what's left of her, along the Columbia River about an hour out of Portland. There, we met the wonderfully dedicated group of faithful sailors who are doing their best to keep LST 1166 alive.

Thanks to the existing "crew" and the earlier efforts of Captain Dillon, we were able to clamber aboard, including Sandy Harman, Alice Dillon, Susan Hamilton and Pam Crews.

We were able to visit areas such as our staterooms and CO's cabin, the bridge, tank deck, engine room and our dimly-lit and thoroughly spooky wardroom. If only bulkheads could talk. For probably all of us, it was a poignant and important way to close a circle in our lives. 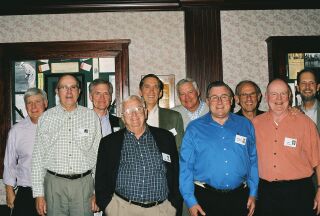 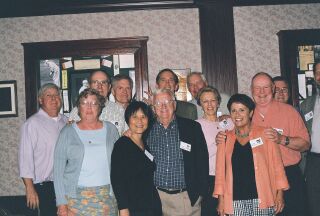 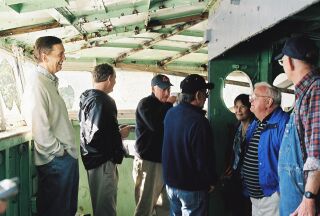 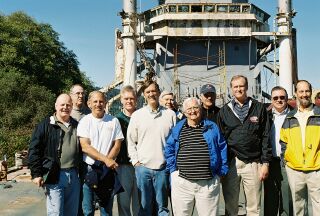 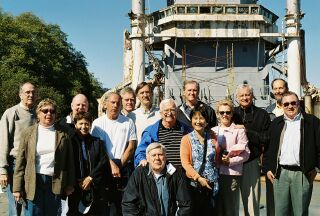 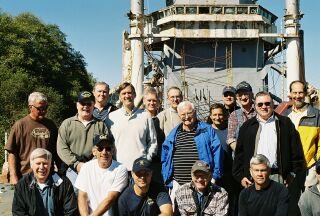